The status bar at the bottom of the Hyperview browser window displays a summary of bandwidth usage, memory use connected with live data, disk space used for data storage, and the current connection status with CIUMon servers. 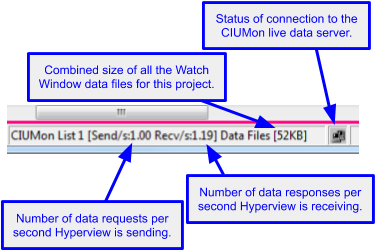 Send/s: Shows how many data requests Hyperview is making of CIUMon per second.

Recv/s: Shows how many data updates CIUMon is sending Hyperview per second.

Data Files:Shows how much disk space is currently used by live data files for this project (including those not currently displayed in the Watch Window).