The block shown will generate an exception report on any change of value. This may be intentional, but can also be an error.

If a value comes from some external source and is rarely changed, this technique assures that the change will be immediately deployed to graphics and other import blocks. After that, the static input means that no extraneous exception reports will occur.

On the other hand, if the input is a dynamic analog value, it may well change every time it is read. This means that an exception report will typically be generated every second, which is why this is brought to your attention. 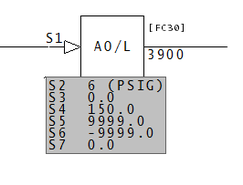