To create a Hyperview shortcut that is usable over the network, you can run the Hyperview installer and directly choose a network location, which will provide a valid "Run Hyperview" shortcut in your destination folder. Alternatively, you can follow the instructions below.

To create a shortcut that is usable over the network: 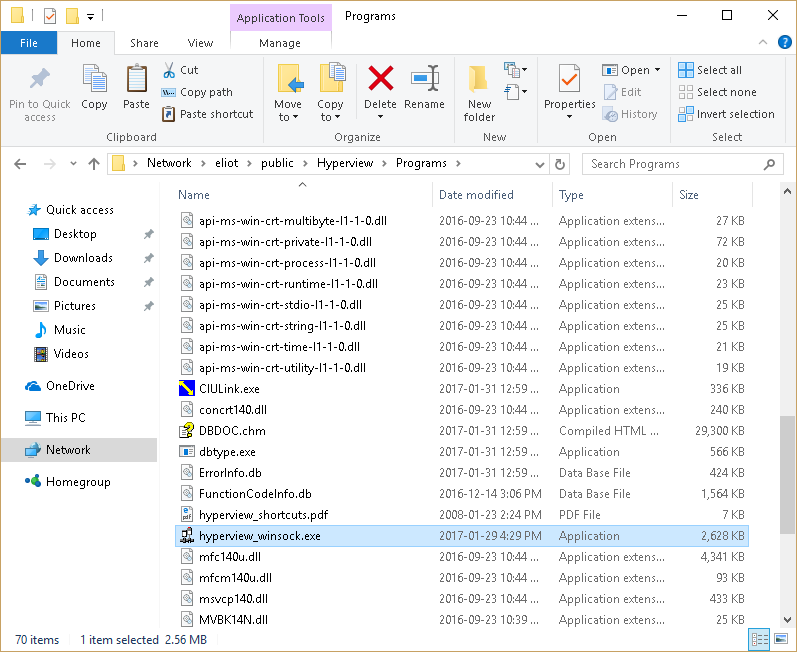 The shortcut that is created will be called something similar to hyperview.exe - Shortcut. To rename it to something that identifies it as DBDOC, right-click it and choose Rename.

Next, verify that the shortcut was created properly. To do this right-click on the shortcut and choose Properties. The two fields we want to take a look at are Target and Start-in.

If your path name is very long, you may be unable to enter it. If this happens, you may be able to use short names. Find the short names, if they exist, by opening a command prompt window (press the Windows key and typing cmdreturn) and using the dir /x command.

For example, if your Start in directory was <"\\Computer Name\ShareName\A folder with an extremely long name\Another folder with a long name\DBDOC\Hyperview\Programs\">, you could find the short names by:

And then finally shorten it to, perhaps, <"\\Computer Name\ShareName\Afolde~1\Anothe~1\DBDOC\Hyperview\Programs\">.

Once you have verified that the proper paths are in place, you need to tell it where to locate and open your project file from.

When the Hyperview kit was installed on your computer, a folder was created to hold project files. A path to that folder needs to be added after the target so Hyperview knows where to find project files. The easiest way to specify this folder is to cut and paste the path from the Start in text box of the Shortcut Properties dialog.

Note: Both <*.m14> and <*.dbdoc> tell Hyperview to open the most recent project file in this data folder, regardless of whether its file type is dbdoc or M14. As long as there is a wildcard character ("*") in your specification, .dbdoc and .M14 are completely interchangable. You do not have to change your old shortcuts.

When you are finished your shortcut should look like this: 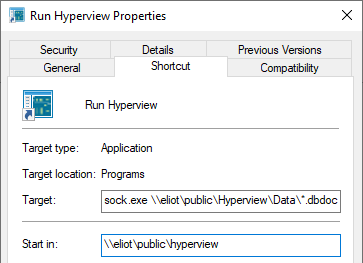 This shortcut can now be copied to the desktop of any user who needs to be able to access your latest project file.