How does DBDOC affect the ABB system?

It doesn't: DBDOC is read-only. Real time monitoring uses the same resources as monitoring with the EWS.

What is a Block?

It is part of the specification process of a process-control point, as in Loop, PCU, Module, Block and is also a drawing element in a CAD file - "struct block".

My I/O sheets are not labelled correctly. Will this be a problem for building DBDOC?

No. We take the loop, PCU and Module from the .mhd file.

How can I relate my files to a particular Loop, PCU and Module?

What is a Function Code (FC, fcode, code)?

What is a Spec / Input (specification)?

Specs are the inputs of function codes. Specs must be set at design time - i.e. when the drawing is created. The interpretation of the specs depends on the function code. Specs whose value is a block number are usually used to reference the value of that block.

Is there an easy way to find changes in specs?

If you leave your .vfy files in your CAD directories, DBDOC will build them into your .dbdoc file, so you can see variation between the module as downloaded and what is specified in your sheets. DBDOC does not currently have the ability to track changes in specs between builds. If you are interested in this feature, please contact us at support@gmcl.com.

If we rebuild DBDOC with blocks taken out, how will monitoring show it on an old copy of DBDOC?

Assuming the you have physically removed blocks from your ABB system and rebuilt your DBDOC project, monitoring blocks which have been removed from your ABB configuration will not harm your ABB system. It will merely result in Hyperview displaying red boxes for the blocks it can't retrieve.

Do we need to have all tag names entered above the block on a CAD? Or will DBDOC do cross-referencing with just PCU, Module, Block number?

PCU, Module and Block number are enough to link. DBDOC puts the tag name and description above the block "A" for Attributes in the .dbdoc file.

What is the BuildPlus configurator?

The configurator stage of the build uses the skeleton .RAW file to locate all of your current build source files. This is a transparent step for the user unless you need to specify special LPM for batch, ladder, AutoCAD and/or text files.

Hyperlink is the DBDOC compiler, which runs during a build. It analyzes various process control system documents performing the following operations:

To find out which Hyperlink version you are using, see Learning about this version of DBDOC.

Decomposer is a DBDOC component which extracts .CAD files from Composer .CLD files during a build. For each Composer database processed, a Decomposer folder is created in the project directory.

What are slave tags?

Module 1,03,13 Block 1325 has been given the tag "TCSD SYSFAIL", even though there is no database record of that name. 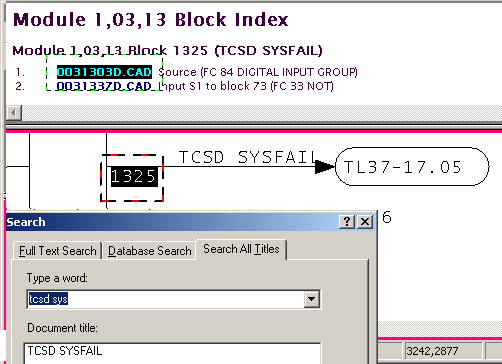